An Evening of Jazz in Support of Professional Musicians

The event, the last major MFM event of 2019, was a music and networking mixer bringing together musicians, music industry professionals and music lovers. This was the second such event, the first happened in 2018, and featured a performance by legendary jazz virtuoso & MFM Board member Billy Harper. The event’s mission was to foster the MFM “Family and Unity Spirit” by inviting all MFM Board members, the membership including the MFM Hudson Valley Chapter (HVC), industry people and jazz fans to Zinc Bar to celebrate #UnityInTheMusicCommunity.

Kim Schmidt was the Mistress of Ceremonies. 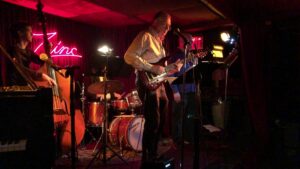 The Eclectix Ensemble (Roger Blanc, guitar, musical director, producer of the event and MFM Board member); Michael Landerman, flute; Steve Sandberg, piano, Ed Fast, drums, and Nate Haselby, bass) started the event. Their set consisted primarily of originals, except for their opening piece, “Dimensions,” which was composed by George Russell, and a piece by Bunny Beck, one of the members of the American Composers Circle.

Their set was truly impressive. Its highlights included – but were not limited to – a ballad in 5/4 by Sanderberg, an uptempo song called “Cool Cats” (by Landerman; which we’re told is about real cats) and a piece titled “Grand Faloon” (with a tip of the hat to Kurt Vonnegut, with a swinging 5/4 rhythm with a quirky melody and harmonies reminiscent of a Danny Elfman score to a Tim Burton movie). The Eclectix Ensemble’s music was the essence of what good jazz should be. They had a laid back and confident mastery of the compositional form and vocabulary of jazz. It was a delight to listen to. 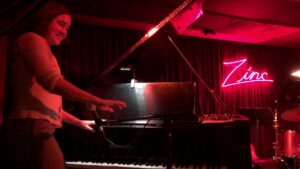 There was a change of the guard, and Blanc joined pianist / vocalist Lyndol Descant. They played a ballad composed by Descant which had a style and poetic sensibility of vintage Carol King and Carly Simon. Descant, it should be noted, is one of MFM’s pioneers of the women musician’s presence in the organization.

After her song, Ms. Descant spoke about MFM. She brought Sohrab Saadat Ladjevardi to the stage. He spoke about the hard work Eclectix put into their set, and how music is a profession. The musicians put in a lot of difficult struggles to make the music we listen to. He emphasized how MFM is fighting to advocate for musicians rights. Steven Johnson (head of MFM’s Hudson Valley Chapter) joined Saadat. He reiterated Saadat’s message.

Descant then read messages of solidarity sent by MFM members Joe Lovano, Arturo O’Farrell, and Ken Hatfield. There was also a special message from MFM Advisory Board Member Dr. Cornel West. It is worth quoting here: “As a disciple of John Coltrane and Mary Lou Williams, I stand in strong solidarity with my brothers and sisters of all colors in the MFM! They give their hearts and souls to us with their great craft and technique in their soulful music that enrich our lives! Let us forever stand with them!!” 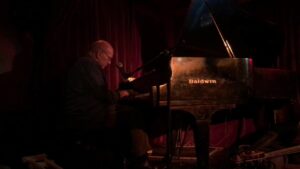 Finally, the legendary jazz virtuoso and MFM Advisory Committee member David Liebman made his way to the stage. Before his musical offering, he expressed how strongly he feels about MFM’s mission and why he supports it.

He started with two beautiful soprano saxophone solos that let the audience know that they were in the presence of a master. He ended with Ornette Coleman’s “Lonely Woman,” which he played on piano and flute simultaneously. Nobody expected this! The only flaw in his performance was that it ended all too soon.

Later, Saadat, Blanc, and, everyone in attendance expressed their gratitude for Liebman’s effort to attend and perform, despite a hip injury. Later his wife told Saadat that Liebman didn’t want to miss this event.

MFM is hoping to bring Joe Lovano as the headliner for next year’s event.

It occurred to me, during the post-gig-schmoozefest, that this event was conspicuous in that it was much better attended than its counterpart last year. This is clear evidence that the MFM mission of advocating a sustainable professional career path for musicians is a need that is being met.