Music Is Essential ZOOM Talk Event #8: Arturo O’Farrill and Zack O’Farrill Speaking on the founding, current work, and vision of the Afro Latin Jazz Alliance, activism, and the intertwined histories of Latin music and jazz. 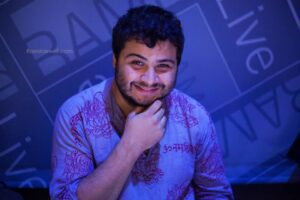 On Friday, December 16, 2022, MF held its 8th Music Is Essential Talk with MFM Members Arturo O’Farrill and his son Zack O’Farrill. MFM member, and newest board member Adam Reifsteck hosted and moderated. The discussion explored the importance of musician-led organizations and the impact that artists can have on the world around them both by using their platform to call for justice and by creating employment opportunities for other artists. They also spoke of the history of “Latin music” and “jazz,” exploring the idea that these labels hide the fact that they are both part of the same musical continuum. They also spoke on the legacy of their and out careers and practice, and how the two are not one and the same.

Arturo O’Farrill is no stranger to those within the MFM family. Celebrated pianist, composer, and educator, O’Farrill was born in Mexico and grew up in New York City. His professional career began with the Carla Bley Band and continued as a solo performer with a wide spectrum of artists including Dizzy Gillespie, Lester Bowie, Wynton Marsalis, and Harry Belafonte. He is also the Afro Latin Jazz Alliance founder, a not-for-profit organization dedicated to the performance, education, and preservation of Afro Latin music.

Zack O’Farrill (the son of Arturo and Alison Deane) is a multi-cultural, multi-musical artist who doesn’t believe in the “walls that separate us.” Zack and his brother, trumpeter Adam O’Farrill, grew up listening to, learning, and playing a wide variety of music unencumbered by the barriers between genres.

Arturo began with an anecdote of his first exposure to MFM and how MFM president Sohrab Saadat Ladjevardi‘s vision of empowering the professional musician coincided with his personal and professional ideals. Zack echoed these sentiments. He added how tenuous the situation is for professional musicians, and how important musician’s rights organizations are to work toward making the situation feasible, when it otherwise wouldn’t be. Arturo shared one very telling anecdote of how his father was lambasted and pilloried for performing “commercial music,” when he was simply doing what he had to do to put food on his family’s table. It’s an eloquent statement of what musicians have to tolerate in a world that treats us as expendable commodities, not caring how we survive, and at the same time demanding that we produce masterpiece after masterpiece with no support, resources, or even common respect.

Arturo saw this as a lesson (and we should too) that nobody is going to help us but us. We have to create our own opportunities. He spoke about his own work in creating a musician’s organization dedicated to the support of Latin Jazz and the people who play it. At this point, Arturo also offered a brief discourse on how Jazz has an inevitable and undeniable link to its roots in African music and culture.

Zack took these ideas and expounded on them from his perspective, especially watching his father build the Afro Latin Jazz Alliance from nothing. He said, and I quote, “It opened my eyes to how effective artists can be if they understand the structures that support the art we practice.”

Arturo and Zack waxed philosophical about this and related ideas, and eloquently described the contemptible social situation we are in where millions are homeless, starving, and desperate while a handful of people hoard all the world’s resources and wealth for themselves.

Ladjevardi added how he has been in touch with musicians in his native Iran. He urged them to organize in some way to counteract the tyranny and horror of the erroneously named Islamic Republic of Iran.

This and the speaker’s discourse sparked some back and forth dialogue among the attendees which explored these ideas.

Arturo went on to describe how his organization grew and the many ways it serves the community, even to the extent of participating in affordable housing in Spanish Harlem (with 30% of the proposed building set aside for people transitioning out of homelessness).

A continued dialogue among the participants followed. Among many things that came up (more than can be fitted into this report) was Zack talking about how the “jazz life” is romanticized and how nobody really talks or knows about the real lives of the pioneer jazz masters like Charlie Parker or Miles Davis. There is a disconnect, and a stigma in the often inescapable necessity of getting a job or doing what you have to do to survive.

The subject of music technology came up. Complaints were voiced about how some of the technologies that are available are destroying things for musicians. And very valid and admissible points were brought up. Later in the discussion, I spoke about how all technology, whether a stone ax or the Jame Webb Telescope, are all a prosthetic of human consciousness. Every invention describes the inventor, and described those who use it. It’s all a matter of how these tools are used (personally, while I do use synthesizers and loops, I believe MIDI packs are a slithering pestilential Lovecraftian abomination from the bowels of Hell’s toilets). This conversation can (and does) go on forever. But Arturio, as usual, put a period on the end of this sentence when he said “Music that’s designed to extract money from mindless people is evil.”

Arturo made another powerful statement when he said that sometimes we teach jazz in a way that avoids the horror of how African Americans were treated in this country. After some discussion of this, the subject of Arturo’s collaboration with Dr. Cornell West (MFM’s only honorary member) came up. He showed a video of a performance of his piece The Four Questions, wherein Dr. West did a spoken word performance.

Zack spoke of his upbringing in a home of musicians, and his work producing opera.

This was a really enjoyable Zoom Talk. It stimulated the idea and purpose of MFM and our allies, and was also very inspirational. Every discussion where Arturo O’Farrill is part of achieves this in a very exemplary way.