What Now? The Case for Relevance of Music 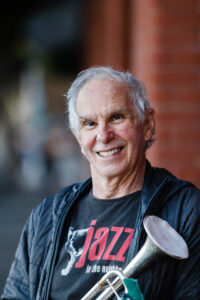 Mario Guarneri poses with his trumpet. The white cover on the music instrument is a mask without which he wouldn’t be able to perform in public due to COVID-19 restrictions. San Francisco, California. November 14, 2020. (Kevin Kelleher/Etc Magazine)

Mario Guarneri has done everything from sitting in with Louis Armstrong at the age of thirteen to performing in the Los Angeles Philharmonic for fifteen seasons under conductors Zubin Mehta and Carlo Maria Giulini. He was principal trumpet for the Los Angeles Chamber Orchestra for a decade, toured Europe with the Los Angeles Brass Quintet.

He has produced solo albums released on the Crystal and Nonesuch labels, played on hundreds of television and motion picture soundtracks, and was a featured soloist for movies like Lonesome Dove and Godfather III. Guarneri also has fifty years experience as a trumpet teacher, including master classes in Asia and Europe. He is currently a trumpet instructor at the San Francisco Conservatory and has recently also been appointed to the SFCM jazz faculty.

In 1986, he developed the Buzz Extension and Resistance Piece (B.E.R.P.) for all brass instruments. The BERP turned out to be a dynamic advancement in brass pedagogy. Since then, Mario’s lectured extensively on the BERP concept at music conventions across the country

In 2013 he founded a non-profit,Jazz in the Neighborhood in San Francisco which seeks to sustain the art form, establish equity for local jazz artists and provide access for young artists and jazz supporters of all ages. In 2021 Mario co-founded INDEPENDENT MUSICIANS ALLIANCE (IMA) which seeks to help musicians collaborate and improvise to help them gain a rational and solid economic footing in an uncertain world. Guarneri has been on MFM’s Board since 2020.

Axel Mueller is a multi-instrumentalist from Mannheim, Germany. He has a degree in jazz saxophone, and 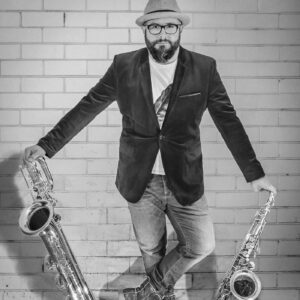 In addition, he spent 10 years as a booking agent and tour manager for various other musical acts. Currently working mostly in Germany, Austria and Switzerland, Mueller is a busy touring musician performing with many well-known pop acts. During the pandemic Mueller became an entrepreneur, manufacturing and distributing a flute mouthpiece he’d invented called the Fliphead.

The talk centered around three subjects;

1. How has COVID affected the life of musicians, and what is the current post-COVID situation for freelance musicians in the US, Germany and Europe?

2. At what point in life did Mario and Axel become entrepreneurs? Why did they choose to do so? Is it possible to run a company while working steadily as a musician? What strategies can assist in dealing with time management?

3. What is the value and relevance of music in today’s world, and how have things changed in that regard since the start of COVID?

The Talk was hosted by Adam Reifsteck.

Guarneri began by speaking about the effects the Covid pandemic had on the lives of professional musicians. He shared how his organization, Jazz in the Neighborhood, has been working to improve things for jazz musicians in the San Francisco Bay area. They set up a performance venue in a warehouse to provide the means to perform. He mentioned that pay for musicians has diminished since the pandemic began to lift. He also mentioned how his organization took pains to find income for musicians.

One very interesting fact he revealed was that they made a proposal to the City of San Francisco for grant money to give to the venues to sustain them. The relevant fact in this is that the mentality of the government officials was such that they could understand how venues would need the money, but couldn’t understand why the musicians needed it.

Mueller offered a discourse on how Covid affected things in Germany. He mentioned how many musicians had to take non-music jobs in order to survive. Some government grants were available, but like in the US, the government in Germany couldn’t understand how musicians live and earn money. He went into detail concerning the ridiculous red tape that musicians in Germany had to endure. Eventually, the government began to prove useful and help our brothers in Germany. But the Russia / Ukraine war created more problems (one of which is linked to the fact that Germany gets much of its energy imports from Russia). He also mentioned that people in Germany are not buying concert tickets. 60% of all concerts and tours being planned for autumn and winter are being cancelled. Between the financial burdens the war is imposing upon people to the comfort zone people allowed to spring up with Netflix and other streaming, they face an increasing threat to their income.

The most depressing thing Mueller reported is that many musicians are simply giving up. There are psychological problems arising from the question of why they should even continue being musicians.

At this point, the discussion vacillated between other aspects of the problems we face, and possible solutions. At one point, Guarneri pointed out that Covid revealed (and amplified) what was already happening with the trend toward the devaluation of music.

Later, Adam Reifsteck spoke about the realities of making a living as a music producer, and running it like a business. This led to the educational branch of his platform: the Music Producer’s Alliance.

Guarneri made an excellent point. He said that musician’s organizations, unions, etc. failed us, and now we must take control and speak with a greater voice. Mueller responded with some observations on the good things that are arising from this situation; which really revolves around musicians taking matters in our own hands.

The discussion went into areas too detailed for this report. I urge the reader to watch the video for him / her self. There is a wealth of information and thought-provoking dialogue.

Note: MFM members, you can watch the video of this event on the member portal.