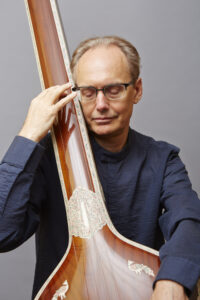 Harrison’s works blend classical music traditions of Europe and North India. Harrison is a Guggenheim Fellowship and NYFA Artist Fellowship recipient. His latest release Seven Sacred Names reached the top 10 classical albums on Billboard and was called “music of positively intoxicating beauty” in The New Yorker. He seeks expressions of universality, meditative and even mind-altering experience via the physics of sound. He joined MFM last year.

In this talk (watch video here: https://youtu.be/7APCGEdAZgU), Harrison proposed to share an introduction to the Kirana lineage of Khayal singing he learned 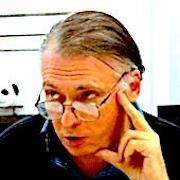 from his gurus Pandit Pran Nath, Ustad Mashkoor Ali Khan, Terry Riley and La Monte Young. Together, we’ll experience the basics of raga, from structural principles to improvisation, and ways of combining raga with Western musical approaches. The talk was hosted and moderated by MFM member Roger Blanc.

After Blanc introduced Harrison (during which time he gave some details about the differences and similarities of Indian and European / American music, emphasizing tuning systems), Harrison began his discourse. He gave a brief discussion on his own history and experience with raga, and the basics of raga theory, and answered a few questions.

What followed was Harrison introducing us to a raga; specifically raga Miyam Ki Todi. He explained the notes of the raga, and then had the participants sing the notes. After introducing the notes, Harrison sang melodies in the raga and the participants would sing them back (it was, of course, necessary for the participants to mute their mics. Zoom can not handle several  simultaneous sound sources). he also provided accompaniment on his piano, which it must be noted, was tuned in just intonation.

After exploring many melodic possibilities in this structured improvisation, Harrison played a composition by his guru Pandit Pran Nath. Then he demonstrated some radical departures from the traditional raga which entered the realm of western harmony (including a few passages in Beethoven’s style), without ever violating the basic structure of this raga.

This opened up a discussion and questions. Each participant comes from a slightly (and sometimes not so slightly) different background. This part of the dialogue seemed to search for a way to understand raga from a western conceptual framework. Harrison answered these questions by drawing comparison between Indian and western music (often using examples from the jazz works of Miles Davis and John Coltrane), but also bringing the spiritual dimensions of the music to the forefront. A great deal of discussion was also devoted to history, and cultural dichotomies between tradition and innovation in this music.

On a personal note, I must share that the talk was, in its entirety, an absolute delight. My own background in Indian music made this a very personal reaction to what was sung and discussed.

Michael Harrison’s musical mastery and skill in teaching was beautifully demonstrated. This is yet another jewel in the collection of educational presentations MFM offers the public.