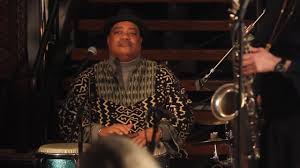 He’s also a member of the MFM UNITY ENSEMBLE and SoSaLa.

His theatrical credits include Macbeth, Caligula, and Dream on Monkey Mountain, and has performed at the Opera House, Carnegie Hall, The State Theater, Avery Fisher’s Hall , City Center, The Apollo Theatre and The House Of Blues. He appeared on Sesame Street and on Julie Andrew’s Green Room on HBO.

Babs Donn Eaton Babatunde has received proclamations from the City of New Orleans, The City of New York Public Advocate’s Office as well a plaque of recognition from the Mid Manhattan branch of the NAACP for his contribution to the Arts.

Baba Donn Eaton Babatunde’s webinar focused briefly, yet intently upon the history of African diaspora percussion, and how they developed in America. One part of the discussion centered on how the conga (once the most popular percussion instrument in the world, before being replaced by the djembe) came to America,

There is no way the history of African percussion in America can be discussed without discussing its place in the slave trade in the US. Drums were not allowed in the US until after Louisiana purchase. This is because drumming was associated with specific African cultures and languages. African drums were used for communication; and this posed a threat to the slave owners. The Geechee / Gullah people (in the Lowcountry region of the U.S. states of Georgia, Florida, and South Carolina, in both the coastal plain and the Sea Islands) succeeded in maintaining and preserving African music and rhythms, despite the ban.

New Orleans was a little lax in the ban and allowed European percussions / drums at small gatherings and in  brothels. This was instrumental to the birth of jazz. In the 1930s jazz musicians introduced Afro-Caribbean & Cuban percussion / drums into jazz. Dizzy Gillespie & Chano Pozo took this to a new level.

In the 1960s, the influence of African diaspora rhythms and their instruments grew during the civil rights movement. The Last Poets (whom Baba Donn Eaton Babatunde plays with) influenced James Brown, Sly Stone, Miles Davis, etc. There was also the development of Boogaloo music (tragically, Boogaloo was recently co-opted as a right wing message).

In addition to this indispensable history lesson, Baba Donn Eaton Babatunde also spoke about the origins of several African instruments and how they developed in the Americas, such as the talking drum, which mimicked human speech, and the Brazilian berimbau which came out of Angola.

Baba Donn Eaton Babatunde spoke about how he was influenced by his uncle (an amateur drummer) and was inspired by the older masters. His experience with this multicultural drumming was an identification with liberation.