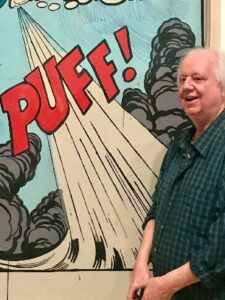 The first MFM Public Forum Meeting of 2020 ushered in the new year with a sense of optimism and forward thinking.

His impressive biography led to a detailed discussion of the history of how music was booked in the NYC area. And this led to the inevitable subject of the process of booking. Needless to say, this opened up a great deal of discussion on the ups and downs of booking musical performances in clubs and other venues. All aspects of this subject were touched upon, including producing independent concerts. Subjects such as the changing demographic, locations (Manhattan is becoming difficult to book; Brooklyn is starting to take precedence in the live music scene), how to get a larger draw – and whether the artist or the venue should be responsible for this, etc.. were discussed in great detail. Inevitably, the question always comes around again and again to one salient fact: how to make this process and the economics work to the advantage of the professional musician in an increasingly hostile music business. This is a question that continues to plague professional musicians, and the answer is constantly changing, and maddeningly elusive.

The next speaker was Jeffery W. James. James is the founder of Jeffery James Arts Counseling, an arts agency dedicated to management and public relations. They represent composers, ensembles, and instrumentalists who compose and perform music of the 20th and 21st Centuries. James began his talk by mentioning the parallels and similarities between the businesses of jazz (which much of the group discussion was centered on, many attendees being jazz musicians), and the classical world, which James works in.

He mentioned how the younger players in the classical world are becoming a lot more adventurous and creative in how their music is presented. They are not waiting to be accepted by an ever-decreasing set of performance opportunities; they are creating their own. One wild example James brought up was a new ensemble called the International Street Cannibals, who produced a performance at Gleason’s Gym; and did performances in the boxing rings. It’s obvious that this spirit of DIY, and out of the box thinking is the only way that classical music is going to survive. James also talked about some of the newer music venues that popped up in Long Island and other surrounding areas outside New York City. He also suggested looking into the scene in Eastern Europe.

Dawoud Kringle (yours truly) was the final speaker. I spoke about the progress of the upcoming podcast MFM Speaks Out, which is expected to be launched in February 2020. As of this writing, Adam Reifsteck’s premiere episode, featuring an interview with MFM member Ken Harfield, has been recorded, and is in the final editing. Similarly, the first of my monthly contributions to the podcast – an interview with MFM advisory board member Dave Liebman – was recorded on the morning of 1/29/20, and will be edited and finished well ahead of the deadline for its scheduled launch in mid-February.

At the beginning of the meeting, MFM President Sohrab Saadat Ladjavardi opened with a brief mention of how, in his native Iran, the first gatherings of a new year set the tone for how the rest of the year will go. If this meeting is any indication, MFM has a great year ahead of it.