MFM and We, the World Celebrating Fundraiser Advocating #UnityInTheMusicCommunity and #MakingMusicIsAProfession 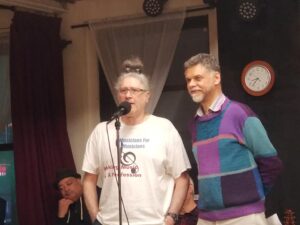 On Saturday, December 21st, 2019, MFM and We, the World joined forces at Dardo Galletto Studios, NYC, for a holiday party and fundraiser, and to celebrate unity and solidarity. We, The World and MFM member Rick Ulfik and MFM’s Sohrab Saadat Ladjavardi organized the event, with Roger Blanc as musical director.

Dawoud in action playing on the Indian dilruba. 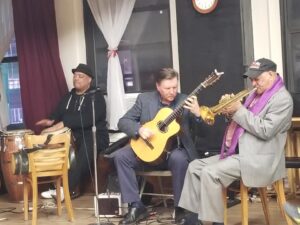 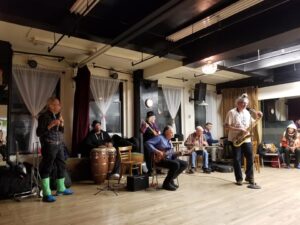 Dawoud Kringle opened the event with a solo performance of two original pieces, and a variation / improvisation on a theme by Jimi Hendrix. Ken Hatfield followed with a masterful and beautiful solo guitar performance and a duet with trumpet master Jimmy Owens.

One of the highlights of the event was the performance offered by the MFM Unity Ensemble with Sohrab Saadat Ladjevardi on tenor sax and vocals, David Belmont on dobro, Roger Blanc on electric guitar, Baba Don Eaton on congas, Rick Ulfik on piano, Joe Burger on electric bass and Lee McClure on flute. (For personal reasons, Maestro Billy Harper chose to sit this one out but was clapping all the time; a loss to everyone). They played a 30 minute improvisation which was described as “groovy, bluesy, Oriental, and freestyle.” Saadat’s saxophone work showed particular excellence. It was very well received by the audience. 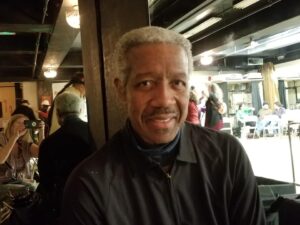 Billy Harper having a good time with good food and music.

The event was very well attended, and the two organizations came together in solidarity. A splendid time was had by all!