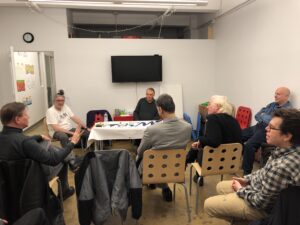 On Wednesday, December 4th, 2019, MFM held its annual membership meeting. The purpose of this meting is to analyze MFM’s activities and progress for the past year, and plan for the coming new year.

The data is as follows:

Although our income from 2019 fell $504 short of covering our basic operating costs (this does not even factor reimbursing Saadat for his loans to, and investments in MFM), this is still a super financial improvement over the last three years:

But MFM’s finances are still far from where we need to be.

A retrospective of MFM’s achievements in 2019 was presented at the meeting:

The results of the annual vote for board members were announced. 100% of eligible voters (Pro Membership) voted for the whole Board unanimously. (it is noteworthy that members whose busy schedule might prevent voting – Dr. Cornel West, Arturo O’Farrill, Joe Lovano as examples – took time to cast their ballots). To reiterate, the following members retain their positions as MFM Board Members:

Other significant points brought up at the meeting included:

Board member Roger Blanc discused MFM’s involvement and support of the NYC ARTISTS COLLECTIVE’s Indie Musicians and DJs Committee and the Zink Bar Mixer and Fundraiser Event. He also presented a proposal for the MFM-New School Project. This will be MFM’s first educational outreach initiative called Music Students, Be Prepared! (MSBP). The MSBP mission is to connect MFM with music students around New York State educating them about the business side of making music and increase awareness of their social-political responsibilities as professional musicians.

Guitarist, writer, photographer, and producer specializing in the music of Africa and AC member Banning Eyre introduced himself.

Finally, MFM’s Goals and Tasks for 2020 were introduced.

Despite obvious room for improvement, it has been a year of formidable achievements for MFM. This trend is expected to continue into 2020, and beyond.