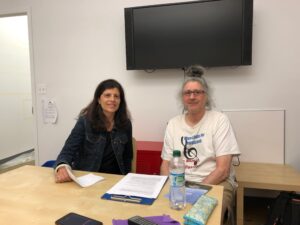 Ms. Stein is an Author, Scientist, Artist, Yoga Instructor, and Ayurveda Lifestyle Counselor, with a Master of Science Degree in watershed science. She developed an interest in alternative medicine after investigating the effects of yoga. She earned certification as a professional yoga instructor from the Kundalini Research Institute and as an Ayurveda Lifestyle Councilor from the Mount Madonna College of Ayurveda. She spoke of how the techniques she used could be used to assist in achieving healing and mental wellness among musicians (several recent studies showed that an estimated 68.5% of musicians suffer from depression and anxiety disorders). To this end, Ms. Stein founded the Mental Medicine Organization. She spoke of the logistics of setting up this organization. She also led the attendees in a breathing exercise. The effects were quite refreshing.

This is important, as almost no other similar resources are available to musicians.

Saadat spoke for a while about MFM’s co-sponsorship of and participation in the Hudson Valley Music Summit in Kingston (NY), August 9th. He described it as “an enlightenment.” The all-day music conference was a success for MFM and for the organizer of this event Dave Hoffman. Congrats! MFM had a booth which presented MFM to a new audience. Saadat made new connections that could prove valuable to MFM’s future.

Saadat made mention of the lack of discussing Musicians Rights per se. Unfortunately, organizing as an option to fight for Musicians Rights wasn’t mentioned at all during the panel discussions. 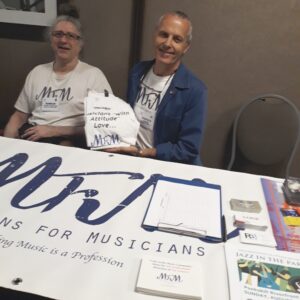 This led to an announcement that MFM Member Stephan Johnson (UK citizen, professional musician, and leader of Future350 Nu Bossa) became the rep and spokesman of the MFM Hudson Valley Chapter located in Kingston (NY). The main goal of this chapter is to reach out and organize the Hudson Valley musicians. Six members have already joined. One of them is legendary jazz man Joe Lovano. Membership is expected to grow.

Johnson’s duties will include voluntarily carrying out the MFM mission, organizing meet ups and events, bringing in new members, administering the new MFM Hudson Valley Chapter MFM FaceBook page, and other tasks. This is the first MFM chapter to exist outside New York City.

The next topic of discussion centered on “Change is Coming;” a new political action committee founded by several music industry executives committed to political change in 2020. This PAC will support candidates who stand up for voter’s rights, health care, social and economic justice, environmental concerns, human rights, criminal justice reform, and gun violence. They will focus on civic engagement, and concentrating in key states that will have the most impact on the upcoming 2020 presidential election. It’s doubtful they will endorse a democratic candidate in the primaries. However, they will highlight candidates, legislation, ballot initiatives, and other national efforts.

Some discussion followed of MFM’s potential involvement in this, using its 501(c)6 status which allows MFM to lobby. It is doubtful MFM will officially endorse any political candidate, but we can use our position to influence American politics in our favor.

The next topic of discussion was establishing an MFM Podcast. MFM member Dawoud Kringle presented his research in setting up a podcast (through mixcloud.com), and discussed production strategies. This could be an important step forward for MFM. Kringle is preparing a proposal to be submitted to the MFM Board: details of the proposal, and the Board’s response, will be announced in one of the forthcoming newsletters.

The contacts made at the Hudson Valley Music Summit, the establishment of a new chapter of MFM, and the upcoming podcast are milestones of achievement. The quality of progress that is being made is unprecedented in MFM’s history.