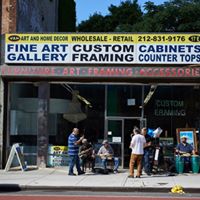 They performed in front of H&M Art (17 East 125th Street, New York, NY 10035). This was an improvised performance (certainly not a problem for this assemblage of masters), and was very well received by the citizens of Harlem.

Some talk was devoted to the question of the economic model of MMNY. Saadat spoke to James Burke, the head of MMNY, and expressed concern that while MMNY was being funded, the performers were not being paid, and were essentially playing for the “exposure” (which is antithetical to MFM’s principles). The performers are not allowed to accept donations either. Saadat went to MMNY’s website, with the intention of finding a plausible incentive to play for MMNY. He learned that MMNY is not a commercial organization, but a non-profit that focuses on public awareness of music and the musician community, and “connect New Yorkers to their communities and with each other,…unites diverse communities in a spirit of celebration and energizes the shared social spaces that make NYC a cultural capital.”

Saadat is intent upon forming an alliance with MMNY some time in the future. 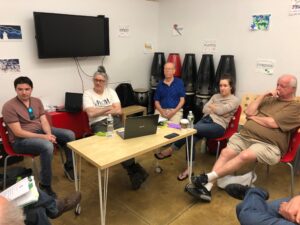 He also mentioned that he’s spoken to the owner of H&M Art about the possibility of MFM performing there. MFM member Lyndol Descant expanded on this, and wondered if it was possible to match venues with musicians; branding the process where musicians are presented in venues where they can be heard. This evolved into an observation of how outlets for live musicians, such as restaurants, have been diminishing in recent years (personally, I haven’t played in an Indian restaurant in years; the restaurants that feature live sitar music have become scarce). The idea of finding a way to present live music in alternative venues was discussed.

Some discussion was devoted to how fragmented the music community in New York is. The problem with the New York music scene is that musicians don’t support each other. Musicians rarely have time to go to shows; everybody is working to survive and the necessary downtime that the support needs is missing. Plus, the city has an ingrained atavistic competition and intense individualism that often defeats its own purposes. There are no easy answers to this.

Saadat brought up the potential for MFM to use its status as a 501(c)6 to influence the political climate of the US. This included some spitballing about the possibility of MFM endorsing a political candidate. No conclusion was reached, but several sides were explored (including Descant bringing up the possibility of a Universal Basic Income for Musicians; which elicited a round of applause). The pros and cons of a fundraiser for a chosen candidate were discussed. 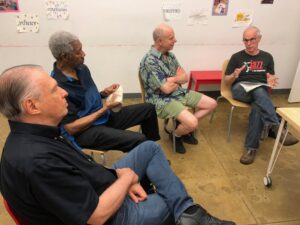 MFM Public Musicians Forum #15 keynote speaker Mario Guarneri, founder and artistic director of Jazz in the Neighborhood in San Francisco offered a talk about JITN. It’s the second time that he was speaking to MFM members. (He did a talk event at WeWork two years ago. Members can watch the video of the workshop on the Member Portal.)

Guarneri is not only an interesting man but also a very positive force in the Bay Area musicians community. In addition to founding JITN, he is a trumpet master, composer, improviser, music educator, music activist, and inventor of the BERP (a device that helps trumpet players develop proper breath support by blowing into resistance, letting one buzz one’s mouthpiece while holding the instrument in the regular playing position).

JITN is a 501(c)3 fiscally sponsored by an umbrella organization called Intersection for the Arts. Located in San Francisco, CA, it was founded to improve the economics of jazz performance in the Bay Area by presenting affordable concerts, paying musicians a guaranteed wage, and supporting the work of established and aspiring jazz artists. JITN created a Guaranteed Fair Wage Fund (GFWF) to encourage venues and presenters to pay musicians a minimum guaranteed amount in advance, regardless of ticket sales. Musicians are guaranteed $150, which is JITN’s pay scale for ensembles of eight or fewer (or $100 for ensembles larger than an octet). Venues who participate in this agree to pay musicians at JITN’s scale for specific Guaranteed Fair Wage Fund events. If a venue normally pays less than scale, JITN will subsidize up to 40% of its minimum. Venues receive this subsidy in advance. JITN also subsidizes any leader’s fee equal to 10% of the amount paid to the member’s of the ensemble. This unique business model guarantees that professional musicians are paid for their performances. This payment is entirely independent of ticket sales or other contingency-based revenue. The funding comes from grants, sponsorship, membership donations, and a variety of other sources (Guarneri is always searching for new income sources to fund JITN).

In the last six months, JITN paid over $12,000 to several venues for the purpose of subsidizing the Guaranteed Fair Wage.

While presenting this information to the MFM group, Guarneri joked that this idea made sense, since musicians often operate as “non-profit organizations” anyway.

Guarneri went on to explain JITN’s history and operational procedures in some detail. As often happens, this inspired a number of relevant digressions in the group’s dialogue. Ultimately, JITN was the result of addressing a problem, and thinking way outside the box in order to solve it. 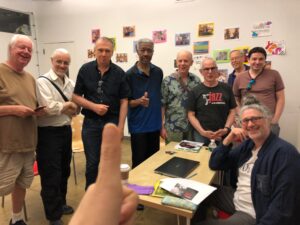 At the end of the meeting, Guarneri joined MFM. The possibilities of the inevitable alliance between MFM and JITN are intriguing. It is not outside the realm of possibilities to set up a similar organization to fund musicians in the Tri-State area.

All in all, the MFM Public Musicians Forum #15 yielded impressive results.