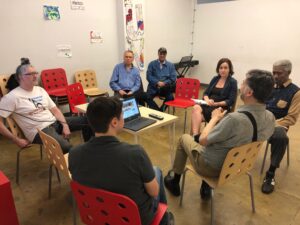 The meeting began with Saadat Ladjavardi speaking about his involvement with the Hudson Valley Summit (scheduled for August 9, 2019 in Kingston NY). He’d reached out to the Hudson Valley musician’s community back in December with the intention of achieving solidarity and unity with them. Saadat announced MFM’s official endorsement of the event. He mentioned that he’d held two MFM meetings in Kingston, and that five musicians from the community joined MFM. He also mentioned that the organizer the Hudson Valley Summit named David Hoffman wants MFM to be involved and proposed an idea to make this happen. The Hudson Valley Summit would reduce the admission cost for MFM members from $175, to $100 (approximately 45%) if five or more MFM members attend. Some discussion about the logistics, practicality, and even the need of the idea followed.

Recent MFM member Rick Ulfik took the floor. After sharing his impressive bona fides, and giving an overview of his organization, he announced a new partnership with MFM and Ulfik’s non-profit organization We, The World. The organization’s purpose and objectives are eloquently stated by Bishop Desmond Tutu in this video: 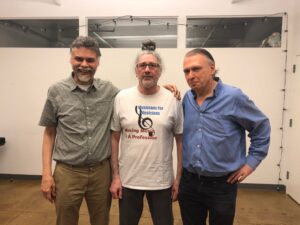 This brought up a discussion on the social responsibility of musicians, and the state of the world. When this played out, Saadat announced a partnership between We, The World and MFM, which will join forces to produce and promote a fundraiser event for the two organizations.

There will be an event Committee between the two organizations which will consist of Ulfik, Saadat, David Belmont, MFM Board member Stefan Andemicael, Roger Blanc, and Andrew Kaen. The tentative time for the Fundraiser will be sometime in November.

Needless to say, this started a discussion on the logistics, problems, and challenges of producing such an event. Roger Blanc offered some discourse on how this may be accomplished. Saadat has put some effort into finding a “name” headliner (he’d already reached out to David Byrne, Arturo O’Farrell, Dr. Cornell West, Stewart Copeland (of the Police), and a few others).

MFM also plans on participating in the MAKE MUSIC NY 2019 event 6/21 (detailed information will be found in the next newsletter). 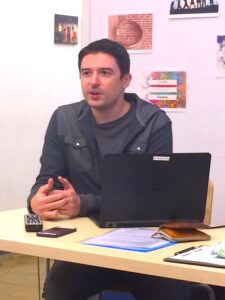 Finally, MFM member Adam Reifsteck spoke about his business and website, Teknofonic. His platform is based on the attempt to circumvent the streaming services who pay fractions of pennies from their recorded music. He attempts to demonstrate and teach how alternative opportunities exist when you ignore the music industry trends and apply 21st-century digital marketing strategies. Reifsteck teaches electronic musicians how to adopt an entrepreneurial mindset and shares practical methods on how to succeed in the new music industry. Reifsteck’s presentation was accompanied by the announcement of a partnership between Teknofonic and MFM.

Sohrab reports about MFM’s $50.00 donation to support legendary jazz guitarist Kenny Burrell who has contributed much to the world of music. Following his 85th birthday concert at Royce Hall, he suffered an accident that led to a two year medical leave. He is still in recovery. His medical expenses exceeded his monthly income. Additionally, he was a victims of identity theft and bank fraud, and the bank has refused to return a majority of the stolen funds, which totaled more than $60,000. Very scary story.

As always happens in these gathering, a multi-faceted discussion ensued. Suffice it to say that MFM is not only changing with the times, it’s ready to make changes.