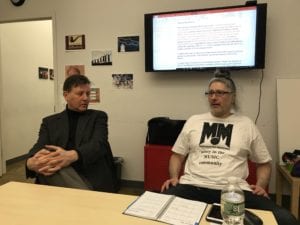 The 11th MFM Public Musicians Forum (and first public forum of 2019 – the January meeting having been cancelled due to inclement weather) began with discussion of the membership drive.

President Sohrab Saadat Ladjavardi talked a moment about the need to approach MFM’s agenda with passion and honesty. AC member Ken Hatfield brought up the question of how to bring the message of MFM to people. The question of how we explain the realities of the music business to musicians – and how we get people to show up for MFM meetings – was explored in depth. MFM offers a forum that explains how the music business actually works, and how to apply it in practice. The problem of communicating this idea to musicians, and delegating the inevitable workload, remains. This last point is a difficult one. MFM’s Board and membership is still young, still small, and there’s not enough people involved to do what’s necessary.

The time is ripe for MFM. More Musicians are becoming activists because we came to the inevitable conclusion that nobody is going to help us. As Hatfield often points out, we have two choices: 1. DIY, and take on the responsibility and workload of running our careers like a business, or 2. hand over control and, ultimately, ownership, of the fruits of our labors to someone else (he made a valid point: “If you produce/ document your music, and someone makes money from it, don’t you think you deserve a taste?”).

Some discussion was devoted to the 61st Annual Grammy Awards Party (on Sunday, February 10th, 2019) in which the attending musicians, members of the music community and the media failed to advocate or even acknowledge the 2018 Music Modernization Act (MMA) victory.

This brings up the issues that have led more and more successful musicians (especially indie musicians) to become music activists. In looking at the general condition professional musicians are in, taking some kind of activist stance is the only logical and rational course of action. The resulting activism has motivated the music community to take action to change laws affecting our livelihoods, as demonstrated by recent legislative victories such as MMA.

There are still inequities of the digital paradigm shift. Musicians who understand the situation are demanding a full re-examination of copyright remuneration (this is necessary: the passing of the MMA was only a first step, and the MMA itself should be seen as a work in progress). One of the most important actions we are advocating is the reform of Section 512 (safe harbor loophole) of the Digital Millennium Copyright Act in the United States, and Article 13 of the copyright directive in the European Union.

In relation to this issue, MFM has made an announcement. Our official position is that we support political actions leading to the amendment of the “Safe Harbor” provision (section 512) of the DMCA. Further details of this, as well as announcements of official MFM action in this regard, will be forthcoming.