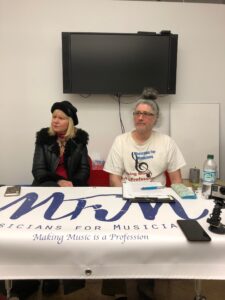 After MFM President Sohrab Saadat Ladjevardi opened the meeting, he presented the first speaker for the forum; Val Kinzler. A native of Queens, NY, Ms. Kinzler became interested in music at a young age. After studying piano at Berklee College of Music, she returned to New York City to attend Queens College, and involved herself in a variety of musical styles. She was mentored by Sid Bernstein, played behind Dr. John and Popa Chubby, and fronted the bands ICU, Blue Lagoon, Technical Virgins and Validation. She presently works with and arranger and bassist, Joe Vasta, Jr. (Mink DeVille, Joan Jett, John Waite, Billy Idol), guitarist David White, and drummer Jon Ihle.

Kinzler spoke about her experience as a producer, and her work as a prevention specialist/counselor at the NYC Department of Education. She spoke about her upcoming NYC Women Who Rock Festival in March, 2020; an event produced in collaboration with Michael McHugh, the founder of New Century Entertainment, (and a speaker at the MFM Public Forum Meeting #19). She also spoke at length about the difficulties of navigating the present business environment and its hostilities toward musicians, and content creators.

One of the most interesting things that were revealed during Kinzler’s talk was the issue of women in the music business. It is hardly worth mentioning that women have traditionally gotten a raw deal in the music industry. Kinzler shared a profound perspective; she said that women are less afraid of men than they are of other women. Men tend to have an eye on a bigger picture, and women tend to focus on threats to their own positions. This is because of insecurity, past treatment as being irrelevant, and being unaccustomed to being in control. I quote Kinzler “It’s not the men who are putting women in this position; it’s the women who are afraid of another woman surpassing them, and feeling intimidated by that. And because they feel so judged in the past, and not being supported in the past, it’s coming from this place of low self esteem.” She went on to say that it’s rare to find women who are comfortable enough with what they are to not perpetuate this “crabs in a barrel” model of behavior in business and social interaction. While there are certainly exceptions to this rule – and there are many men who answer to this description – this insight was an epiphany that could be instrumental in things changing in women’s favor.

MFM member Adam Reifsteck followed with a brief and informative report about the forthcoming MFM Speaks Out podcast. This is the second installment of the podcast, where Reifsteck interviewed musician, composer and activist Ken Hatfield, who spoke about important information about copyright laws (the first was launched on February 15th, and featured Dawoud Kringle interviewing Dave Liebman). There was some discussion and clarification about the production of the podcast.

MFM advisory member Ken Hatfield spoke about the importance of metadata and the ISRC code (International Standard Recording Code). He prefaced his talk with a brief description of the Music Modernization Act (MMA), and how MFM championed its passing.

This set the perspective of his talk. I quote Hatfield: “All the digital platforms that you’re streaming are aware of the fact that eventually they’re going to have to pay for the content. They can get by without paying for the content by using the ‘Wild West Ethos’.” He described this relatively new situation as being analogous to a lawless territory where a hostile and dangerous environment eventually necessitates a legal and judicial system to bring order and justice to the chaotic situation. The MMA is an attempt to do this. An organization called the Mechanical Licensing Collective (MLC) is creating a collective database that will allow the content creators to get credit for the use of their work. This system cannot work unless they have accurate information to work with. This is where metadata and ISRC codes come into play; it correctly identifies the legal owner of the content. Musicians / composers / songwriters / publishing owners have, as of this writing, three years to submit the correct information in the ISRC codes (the deadline is January 1st 2024). If not, the money they would have received will go to major publishers based on market shares, and someone else (such as Taylor Swift, Jay-Z, etc.) will be paid for your work. Therefore, the importance of making sure your ISRC codes contain accurate information cannot be over-emphasized.

The necessary courses of action are as follows:
1. Make sure anything you compose is properly registered with the US Copyright Office.
2. Make sure any digital recordings of your original and cover music has the proper metadata.

Some companies, such as CD Baby, offer this as a service; they assign an ISRC code to your digital releases. Hatfield also mentioned that half of the money comes through PROs such as BMI or ASCAP, and the other half will come from Sound Exchange; and urged us to set up an account with Sound Exchange if we haven’t already done so. One of the advantages to this is that you can correct any erroneous information associated with your work. 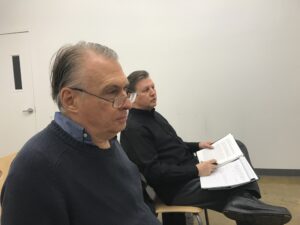 AB 5 is designed to regulate companies that hire gig workers in large numbers, such as Uber or Lyft. Exemptions to this law include doctors, dentists, insurance agents, lawyers, accounts, real estate agents, hairstylists, and a variety of creative professionals (fine artists). However, AB 5 also exempts business-to-business contractors and referral agencies (with specific requirements).

The likelihood that AB 5 will close down the independent music industry in California forever is a very real danger that musicians face. Exceptions are currently made in AB 5 for a number of businesses; and musicians are not among them.

The problem with the proposed legislation is that it will primarily designate bandleaders and individual musicians as employer. There are a lot of problems in this. In 1972, the AFM wrote a letter of agreement to the National Labor Relations Board. The letter’s content stated that a club owner is not defined as an employer, but defines the musicians as employees. And the problem with this is that in this situation, there is no clear definition of the employer. This set the groundwork for the bandleader being the employer.

When AB 5 was up for consideration in California, the musicians union AFM did nothing. This put businesses that profit most from musicians’ work (clubs, labels. distributors, etc), in a position of insulation from labor action. They will remain so under the proposed legislation. This puts band leaders into the position of “employers,” and will result in benefits, payments, and administration costs being deducted from side musician’s earnings, and work being driven further into a cash economy, effectively shutting down work opportunities.

It will weaken musicians’ copyright claims. Any work produced by employees for employers would become a “work for hire.” The employer has the claim to all rights to the work produced – which means that the musicians don’t retain their own copyrights.

Then there’s the problem of non-representation. The American Federation of Musicians (AFM) accepts the AB 5 law calling their members employees. Fewer than 1500 New York City area AFM members are deriving most of their income from work under AFM contract. Which means they are already employees, and thus have substantially different interests in this legislation from the other 50,000+ NYC area musicians (approximately 6000 of whom are members of the AFM’s Local 802]. AFM’s past opposition to carve-outs is not representative.

Finally there is the overall impracticality of AB 5. Unlike people like Uber drivers, gig economy musicians normally have multiple income streams. Within each stream are multiple clients. There is no single one of whom that could function as an employer. 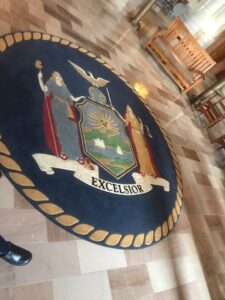 At the end of his speech Sohrab jumped in and reported about his trip to Albany, Monday, February 24, with the NYC Artist Coalition – Independent Musician and DJs Group (NYC Artists Coalition IMDJG) with Olympia Kazi, Marc Ribot and Jean Cook. They met with five key players from the Senate, the Assembly, the Governor office and the AFL-CIO who are all involved in working out a ” NY State gig economy bill” based on the California AB 5 Law. In all five meetings this group clarified their position and expressed their fear that for freelancing musicians and djs, the respective bills under consideration may have unintended consequences producing the opposite effects. They want to keep the bills’ positive features while avoiding harmful unintended consequences.

It may be premature to say this, but it’s a safe estimation that sooner or later, MFM will take a formal stance against AB 5.

The Twentieth MFM Public Forum Meeting continued and expanded upon MFMs mission to stay on top of the cutting edge of the music business, and all matters relevant to the professional musician.